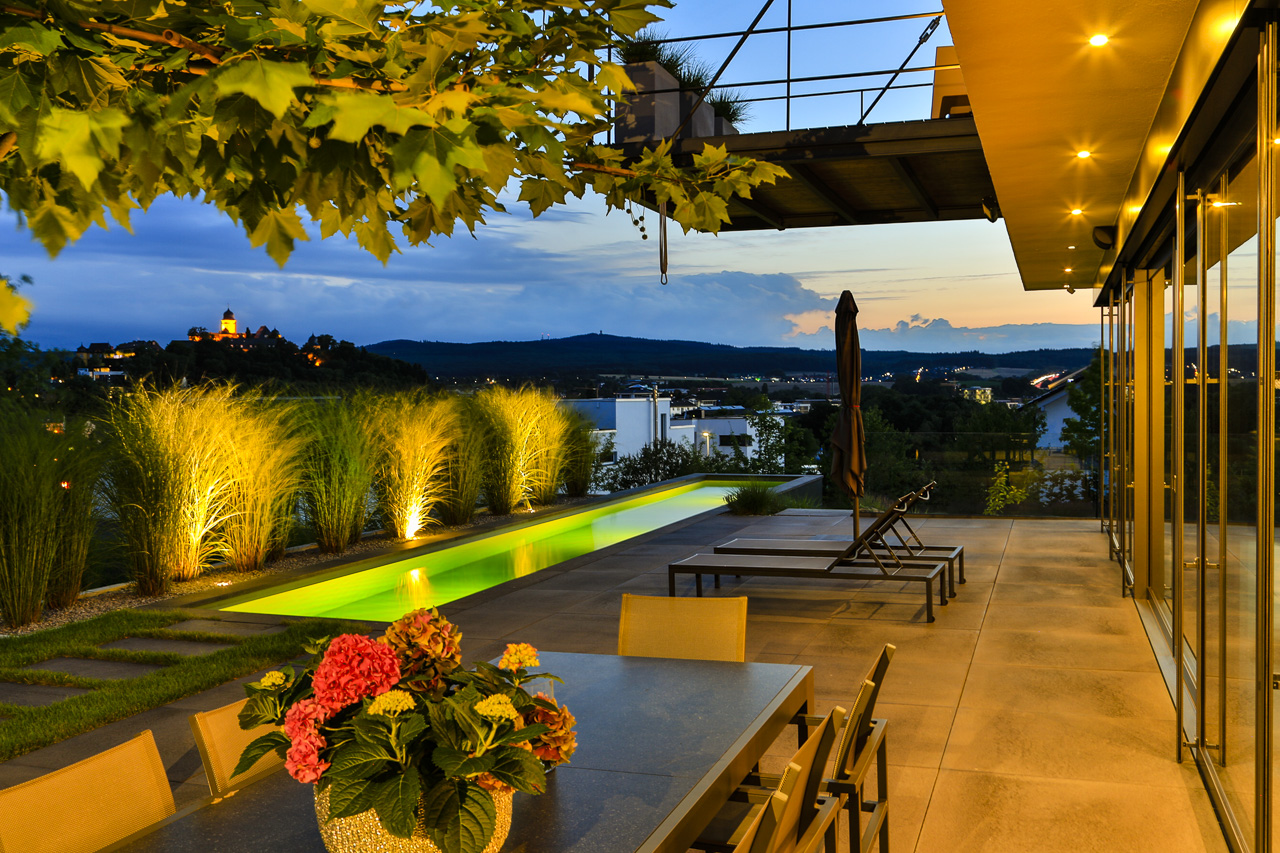 Since technology has opened up almost unlimited possibilities for artificial lighting outdoors and even under water, hardly any ambitious garden afficionado would want to do without such options. The design possibilities with light outdoors are certainly manifold. Trees can be illuminated in their full splendour, spotlights highlight individual details, and simple structures – when properly illuminated – become works of art during nocturnal hours. “A successful lighting concept in the garden lives from the exciting interaction between light and dark and effectively displays a garden above and beyond daylight,” says garden designer Peter Berg from Sinzig.

In ideal cases, the luminaires cannot be seen

Lighting design has long played an important role in the garden projects of GartenLandschaft Berg. Because through such projects, owners coming home after work do not look into a dark hole when viewing their garden, but can enjoy the poetry of the shapes even in the dark. Light has the most important function in spatial language and directs the eye of the beholder. However, glare in such situations is the death of every cosy atmosphere. The eye automatically looks into the brightest point and then does not respond fast enough to focus again on the person opposite or on the path. If benches, steps and kerbs are discreetly illuminated, this on the other hand ensures safety.

Light is also impressive when combined with water. For this reason, a pond or fountain near to a seat should be especially set in scene at night. If the water surface is calm, it’s a good idea to illuminate the surrounding plants to create reflections. If, on the other hand, the surface is set in motion by a stream or a water feature, underwater spotlights achieve the greater effect. If used skilfully, they ensure that light transmits the wave movements of the water as fascinating patterns onto the surrounding surfaces.

The expert advises against a completely illuminated garden. Because through shadow, spatial language becomes alive. Plays of shadow also stimulate the imagination and arouse curiosity about what is behind things. “Illuminating a garden should be as discreet as possible,” says Berg. The secret of perfect planning is that light can be seen at certain points, but no luminaires. Also, it creates a wonderful atmosphere when moonlight in the garden still creates shadows. This interplay of light and shadow is considered a high art of lighting design in the garden. The lighting should not cause glare or be too bright or dazzling. “Ultimately, there are few gardeners who can do this perfectly,” admits Berg. Fortunately though, some lighting designers specialise in outdoor areas. Peter Berg for example often works with Fritz Döpper from ‘lichtundcreatives’ in Hilden, who has illuminated many gardens.

Instead of using a powerful spotlight from the house wall to immerse everything in glistening light, professionals open up the space to the human eye through a variety of illuminated points. This not only provides orientation but also conveys a feeling of security and wellbeing. Instead of “alarm lighting”, designers rely on a mix of permanently installed and variable garden spotlights, explains Berg. A tree can be illuminated to advantage at any time of the year. But things are different in beds: if a spotlight illuminates attractive shrubs there in summer, it is directed onto the adjacent grasses from autumn onwards. Movable spotlights allow flexibility without having to re-route cables. If possible, power supply should be installed in the ground at an early stage of garden planning, because retrofitting ducts is expensive and laborious. “Even if the budget is tight, it’s advisable to have a lighting concept at the start of the outdoor work,” explains the designer. Such planning pays off in the long run: if the connections are already in the ground when the luminaires, transformers and circuitry are finally purchased, the lighting design can be implemented quickly and without major earthworks – and carefully created surfaces do not have to be torn open again.

In order to create the right mood for any situation, garden lighting with several circuits is recommended. Light can be switched on or off as desired using a remote control. If the seating place is changed or a spotlight causes glare, all you need to do is press a button. The garden designer also recommends a twilight switch for his clients. “If home-owners come home from work in the dark and glance up at their illuminated house tree they immediately feel welcome.” A single eye-catcher is usually enough for this. An illuminated wall also looks elegant, either as a bright surface or with shadows cast by trees and grasses. For safety reasons, it is also advisable to make steps, and trip hazards such as a higher wooden deck, visible at night. Peter Berg therefore likes to illuminate steps, handrails and terraces from below. This creates the fascinating effect that the surfaces seem to float upon light.

Light needs shadow to have impact

But how bright should a garden be? Dark corners are needed for light to have impact, and also for moths to find dark places despite the lighting. The favourite illuminated place catches the eye all the more if the surroundings are immersed in semi-darkness. A successful concept often reminds the owners of a holiday resort with illuminated palm trees and a lit pool. The more complex a garden is designed, the more it can be illuminated. Two light sources are sufficient on the other hand for a terraced house garden with a hedge-lined lawn. If people wish to illuminate their gardens during the Advent season, they should also plan in weatherproof sockets. A light net over the box tree ball or in the fir tree is then quickly implemented.

LEDs are first choice in gardens

Today, professionals almost exclusively use light-emitting diodes (LEDs) in gardens. They consume comparatively little electricity. However, this doesn’t achieve savings in the garden because of the high purchase costs (LEDs cost about twice as much as conventional lamps) and the short operating times. The luminaires also generate much less heat than others. This means they can be mounted without problems on tree roots for example. Another advantage: 90 percent of the UV component that attracts moths to artificial light sources and causes them to die is filtered out of the light sources.

LEDs are still associated with cool light. For the developers in the Far East, human perception was initially not an issue. In the meantime there are many different light colours adapted to needs in different parts of the world. In Spain, for example, light with a high blue component is often used because it has a cooler impact. The Finns, on the other hand, prefer warm, yellowish light. For our latitudes a warm white light colour in the range of 2800 to 3000 Kelvin is ideal. The low blue component also ensures that green plants do not have a grey look in the light.

Our garden expert Peter Berg is a landscape gardener from Sinzig, Germany. He has been active in the region for 16 years with his company GartenLandschaft Berg. Twice already, in 2011 and 2014, he was honoured by the industry as Germany’s best garden designer and has also published three books. During the garden weeks he provides professional tips every week. Next week will be about design possibilities with hedges.